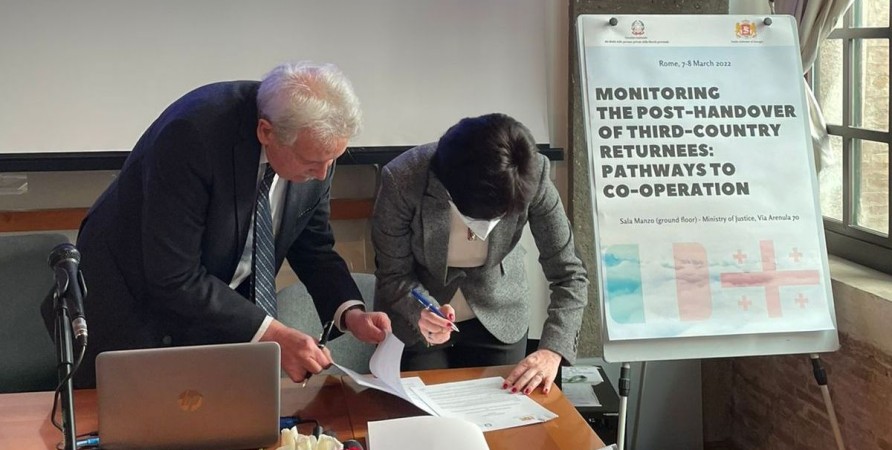 On March 7-8, 2022, representatives of the Public Defender of Georgia visited Rome at the invitation of the Italian National Guarantor for the Rights of Persons Detained or Deprived of Liberty, where a bilateral working meeting was held with the Italian National Preventive Mechanism and a cooperation agreement was signed.

Future cooperation between the National Guarantor for the Rights of Persons Detained or Deprived of Liberty and the Public Defender of Georgia, the methodologies used during the forced return operations and other relevant issues related to the preventive function of monitoring were discussed at the meetings. Representatives of the Public Defender's Office also visited one of the prisons in Rome.

On March 7, Mauro Palma, National Guarantor for the Rights of Persons Detained or Deprived of Liberty, and Tamar Gvaramadze, First Deputy Public Defender of Georgia, signed a cooperation agreement on the monitoring of return operations, under which both institutions will exchange information and actively cooperate with each other during the forced return of citizens from Italy to Georgia, as well as during the subsequent phase in Georgia. The signing was also attended by Natalia Kordzaia, Consul of Georgia in the Republic of Italy.

The agreement reached between the Italian National Preventive Mechanism and the Georgian Public Defender’s Office is a new and unique format of cooperation. This type of agreement enables the parties to jointly control the protection of human rights at all stages of the return operation and the proper fulfillment of obligations by state agencies.

The meetings were organized by the Office of the National Guarantor of Italy as part of the “Implementation of a forced return monitoring system” project of the Asylum, Migration and Integration Fund (AMIF).