More than a month has passed since the disappearance of Azeri journalist Afgan Mukhtarli, who had been living in Tbilisi, from the city center in the evening of May 29, 2017. Next day he was found on the territory of Azerbaijan, where Azerbaijani law enforcers detained him for illegally crossing the border, smuggling a large amount of foreign currency and resisting police. The journalist says he was kidnapped by individuals wearing uniforms of the Criminal Police of the Ministry of Internal Affairs of Georgia, who were speaking the Georgian language, and was handed over to Azerbaijanis, who handcuffed and brutally beat him. The Ministry of Internal Affairs of Georgia launched an investigation under part 1 of Article 143 of the Criminal Code of Georgia, pertaining to illegal deprivation of liberty.

The Public Defender considers that investigation of the alleged offense committed by the Ministry of Internal Affairs of Georgia by the same Ministry cannot provide the degree of independence required for effective investigation.

In addition, the Public Defender considers that Afgan Mukhtarli should be granted the status of a victim in order to ensure that he can enjoy all the necessary procedural rights and that he and his lawyer have more opportunities to observe the investigation into the alleged offense committed by the officers of the Ministry of Internal Affairs of Georgia, which, as a rule, raises legitimate questions.

Consequently, the Public Defender of Georgia addressed the Chief Prosecutor of Georgia with a proposal to make a decision on the transfer of the criminal case of the alleged offense committed by the officers of the Ministry of Internal Affairs of Georgia to the investigators of the Prosecutor’s Office and to grant Afgan Mukhtarli the victims’ status.

The Public Defender closely observes the events in connection with the case. Among them is the video recordings of the camera installed in the vicinity of the Grigol Orbeliani Square (former Kolmeurneoba Square), which was spread by the media. The video stops at the moment when Afgan Mukhtarli is supposed to appear in it and continues with a different scene. In particular, different time, weather and cars are shown in the video. The Public Defender's Office has already appealed to the Chief Prosecutor's Office of Georgia and requested information about any suspicions regarding the authenticity of the video footage and whether relevant expertise had been appointed to determine the above. At the same time, due to high public interest in the case, the Public Defender's Office addressed the Chief Prosecutor's Office of Georgia with the request to study the materials of the criminal case.

It is unfortunate that even though a month and a few days have passed since the launch of the investigation into the case of such a high public interest, the public still has no information that would increase their confidence in timely and efficient investigation. The Public Defender expresses hope that the Chief Prosecutor's Office of Georgia will make a timely reaction to his proposal and will immediately take all measures to ensure a timely and effective investigation and will bring all the offenders to justice. The Public Defender continues to supervise the process and will periodically inform the public of his assessments about certain aspects of the case. 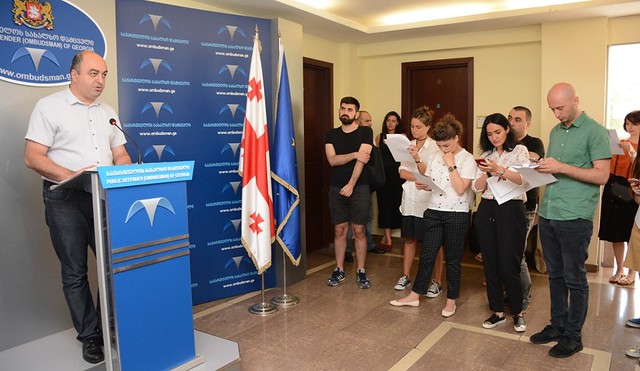