On August 1, 2018, the Public Defender of Georgia met with the population of the villages located along the dividing line. Nino Lomjaria talked to the residents of Bershueti and Kirbali villages, up to 25 residents of which have been detained since 2013. Part of the land is now on the occupied territories due to erection of barbed wire fences and installation of banners in the villages. In 2017, the occupation line was moved 700 meters into the Georgian-controlled territory and the population of the villages further lost hectares of land.

Social problems, access to healthcare, infrastructure and land registration issues are serious problems faced by the residents of the villages.

"It is important to supply the villages with drinking water and to arrange irrigation system in the shortest possible time. The number of people arrested due to crossing the so-called border is high and it is important this issue to be still actively discussed in international formats," - Nino Lomjaria stated.

The Public Defender also visited the village of Zardiaantkari in the Gori municipality, which suffered the worst damage during the 2008 war.

Most of the houses in the village are inadequate for living, but until now only three families, houses of which were completely burned, have been given compensation – 15 000 dollars.

Due to the damaged houses and severe socio-economic problems, part of the population has not returned to their homes and lives in the Gori kindergarten.

“The situation of the houses damaged during the 2008 war is becoming worse each year, which in turn increases the finances needed for their rehabilitation. In addition, the people living in the damaged houses face the danger of being left without housing. The governmental commission should make a final decision with regard to allocating finances from the state budget for the rehabilitation of or compensation for the damaged houses. According to the Gori Mayor, 41 houses need rehabilitation, which will cost GEL 720 000’, Nino Lomjaria said.

The Public Defender also viewed the living space of people living in the Gori kindergarten, which is in poor condition: bathrooms are out of order, floor is damaged, corridors have no windows; each family has only one room. In addition, people living in the kindergarten are unable to enjoy state programs for conflict-affected population (for instance, the firewood supply program). The kindergarten is not supplied with natural gas, while the electricity bills are paid by the conflict-affected persons themselves.

In turn, functioning of the kindergarten is hampered and it may lose accreditation. That is why there are frequent conflicts between the kindergarten administration and people living in the building. 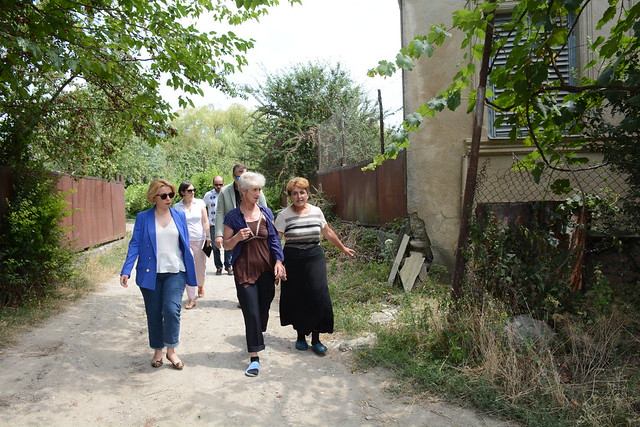