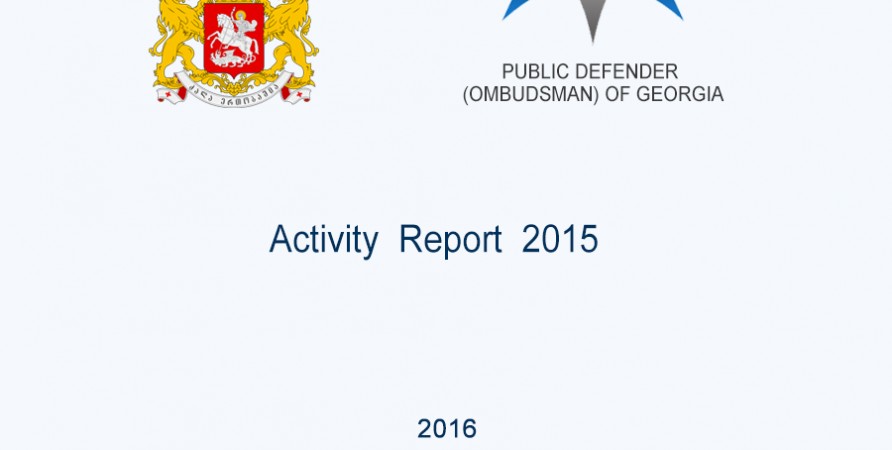 On February 9, 2016, the Public Defender presented a activity report 2015 to the representatives of the Government, Parliament, diplomatic corps, international organizations, media and civil society. The report provides information on the implementation of Public Defender’s recommendations and proposals.

In 2015 the number of applications submitted to the Public Defender increased compared to the previous year and amounted to 8517; human and financial resources of the Public Defender’s Office was strengthened; relations with international human rights and regional organizations were deepened and expanded; the practice of preparation of special reports on various aspects of human rights was intensified; high level of reporting on the activities of the office was maintained in the media sources; dialogue with diplomatic corps and international organizations became regular; legislative work of the Public Defender was strengthened in terms of human rights; 24-hour hotline was launched, the Academy of Human Rights was opened.

Election of the Public Defender as a full member of the Bureau of the International Coordinating Committee of National Human Rights Institutions was one of the important events; working with the commissions in charge of implementing the action plan defined by the EU Visa Liberalization and the Association Agenda, the EU-Georgia Human Rights Dialogue, the US-Georgia Charter on Strategic Partnership for Democracy and Governance was also very important.

A total of 80 recommendations/proposals were prepared in 2015. 5 out of them were sent to private individuals within the authority of the Law on Elimination of All Forms of Discrimination.

When defining the quality ratio of implementation of recommendations/proposals, the Public Defender considers not only formal, normative criteria, such as a reply to a recommendation or the term of reply, but also assesses the effectiveness of the actions performed by the agencies with regard to the restoration of violated rights.

Like the previous years, the level of referral to the Chief Prosecutor's Office was high – 22 recommendations/proposals, the vast majority of which concerned the launch of an investigation into the cases of ill-treatment.

It should be noted that the recommendations submitted to the Prosecutor's Office concern not only the launch of an investigation, but also its effective continuation and completion in time, which are one of the quality indicators of performance. Unfortunately, in 2015 the efficiency of investigations launched by the Prosecutor's Office on the basis of Public Defender's recommendations was significantly low.

See the electronic version of the presentation