State of Rights of Older Persons in Specialized Facilities

On 1 October 2015 Public Defender Ucha Nanuashvili held a presentation of a monitoring report of the Department of Rights of Persons with Disabilities of the Public Defender's Office and the National Preventive Mechanism about the state of rights of older persons in daily specialized facilities.

At the event the Public Defender talked about the violations revealed in Tbilisi and Kutaisi retirement homes as well as in 5 facilities serving older persons.

"Non-adapted environment, poverty, ill-treatment of beneficiaries, violence, lack of personnel and low qualification, deficit in medications, lack of information about available services are just part of the problems that allow us to describe the situation in the boarding houses as degrading. The existent situation creates the danger of complete isolation of beneficiaries. And the most worrisome is the fact that no inspection is carried out in these facilities”, - said Ucha Nanuashvili.

The Public Defender has already appealed to relevant authorities with recommendations to properly ensure realization of the rights of older people under state care and to eradicate the existing shortcomings.

The event was attended by representatives of the Ministry of Labour, Health and Social Affairs. They confirmed existence of problems in the system, but added that they could not solve them alone and that consolidated efforts of the government were required.

Representatives of the Parliament’s Committee of Health and Social Affairs, the Committee of Human Rights and Civil Integration, the Social Service Agency, the State Fund for Assistance and Protection of Trafficking Victims, the organizations working on the rights of older people as well as the monitored boarding houses were invited to the event.

After the presentation, discussion focused on how to solve the problems and the necessity to develop a unified concept.

It was the first occasion that the Public Defender's Office conducted such a large-scale monitoring and issued a special report on State of Rights of Older Persons in Daily Specialized Facilities.

25 years ago the United Nations declared October 1 as the International Day for Older Persons and the Public Defender's Office symbolically held a presentation of the report on this day.

See the electronic version of the report. 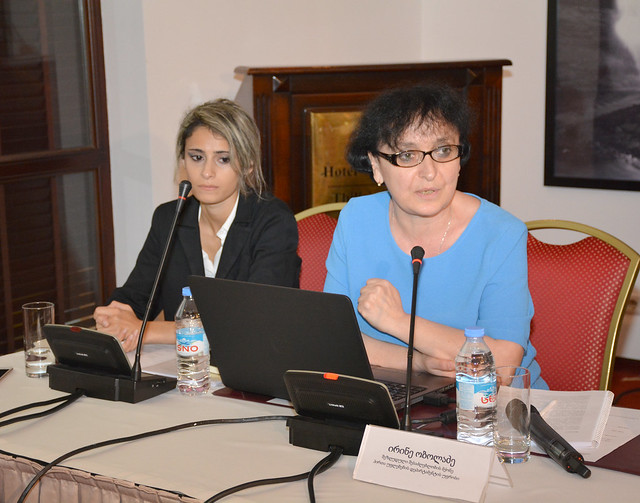