Open discussion about civil rights of military servants – freedom of assembly and association, as well as freedom of expression, was held at the conference for the first time. Local and foreign experts discussed practices and legislations of various countries, including Georgia, and spoke about the restrictions on military service for different legitimate purposes during the implementation of civil rights. Considerable time was devoted to the mandates and activities of the Public Defender and various European human rights institutions, as well as military ombudsmen, in the field of protection of human rights of military servants. Discussions were also held about the practice of the European Court of Human Rights, as well as military servants’ participation in demonstrations, strike and association in professional unions.

Speeches were delivered at the conference by representatives of international governmental and non-governmental organizations working on military issues: the Democratic Control of Armed Forces (DCAF), the European Organization of Military Associations (EUROMIL) and the Office for Democratic Institutions and Human Rights (OSCE/ODIHR), as well as the Public Defender’s Office of Georgia, the Ministry of Defense of Georgia and military ombudsmen of European countries.

The Department of Protection of Human Rights in Defense was established in the Public Defender's Office in March 2015. The Department studies and protects the rights of recruits, military servicemen and war veterans.

The Department studies and protects the rights of military servants, recruits and war and military veterans. 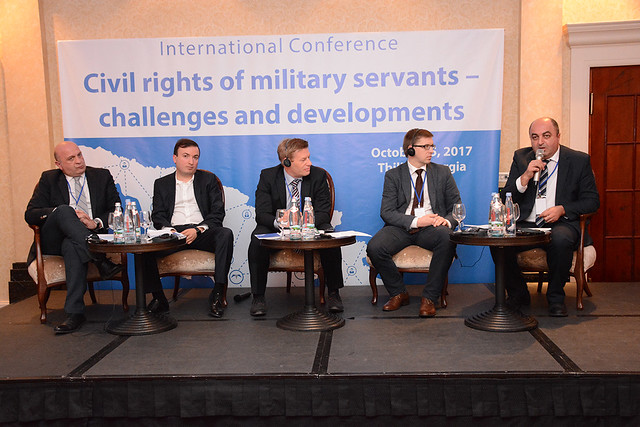