Awarding Ceremony of Winners of Me Ombudsman 2016

The competition was held for the seventh time in 2016. The game started on October 10 and 864 teams - 1728 students registered for it. Only 11 teams – 22 students qualified for the final, third round. The essays of the final round were assessed by the jury composed of 3 independent experts.

“The main mission of the Me-Ombudsman competition is you and your peers to get information about the Public Defender and human rights in general. I believe that the knowledge gained during this competition will help you become good citizens of the country and protect your and others’ rights," - said the Public Defender and congratulated the winning students on the success. Ucha Nanuashvili also thanked the European Union and the Ministry of Education and Science for the financial and organizational support.

The first place in the competition was taken by Nino Khaindrava and Julieta Janelidze – students of Poti public school No 15 (the name of the team was Juniy), the second place was taken by Mariam Tortladze and Nana Afirdonidze from public school No1 of Kveda Sazano village of Zestafoni Municipality (team Olympus), while the third place was taken by Gvanca Chighladze and Tamar Chighladze from the village of Chikhi of Sachkhere Municipality (team Tamarioni). They were presented with laptops, iPads and tablet computers.

Me-Ombudsman is a competition organized by the Public Defender for students aged 13-18. Ombudsman is a person who acts as an intermediary, representative and human rights defender between the citizens and the state. In some countries Ombudsman is called Public defender.

Public Defender of Georgia is a constitutional institution that oversees the protection of ​​human rights and freedoms, identifies violations and promotes restoration of violated rights.

One of the major preconditions for the existence of a full-fledged democratic state, together with other mechanisms, is high culture of human rights. Me-Ombudsman, organized by the Public Defender's Office with the support of the Ministry of Education and Science and the financial assistance from the EU project “Support to the Public Defender’s Office”, is one of an integral parts of this culture. 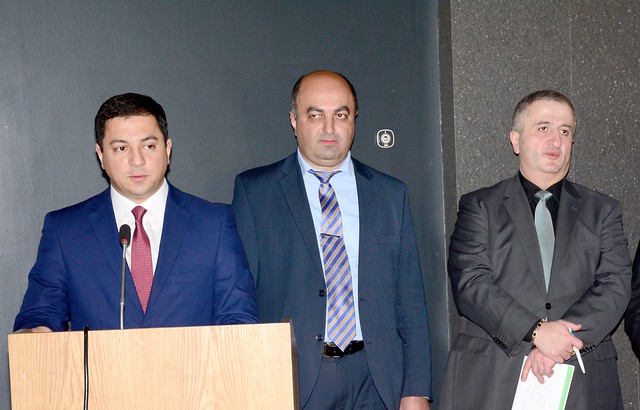