Award Ceremony of Competition “Me –Ombudsman 2015”

The competition "Me - Ombudsman" was held for the sixth time. The game started on October 26. 291 teams (582 students) were registered for the competition. Only 11 teams (22 students) qualified for the final, third round. Essays of the final round were assessed by the jury composed of 3 independent experts.

"Me - Ombudsman" will significantly raise awareness on human rights among adults. The increasing number of participants indicates that the younger generation shows greater interest in democratic values", - said the Deputy Public Defender and congratulated the winners on the success. Paata Beltadze also thanked the EU for financial and organizational support.

EU Ambassador to Georgia Janos Herman talked about the importance of the competition in terms of establishment of European values ​​in Georgia and the close cooperation with the EU's main partner in the country, the Public Defender's Office. He pointed out that similar events contribute to the deepening of democratic principles, the rule of law and awareness on the importance of protection of human rights.

Deputy Minister of Education and Science Lia Gigauri emphasized the importance of the educational methods for the development of democratic civil society, including contests, competitions and trainings.

The initiator and founder of the competition, former advisor to the Public Defender and incumbent Deputy Minister of Internal Affairs Archil Talakvadze noted that due to the gained knowledge, the new generation will not be able to neglect human rights abuses. "You are the future of Georgia and the people who must speak out against injustice."

The competition was supported by the Ministry of Education and Science of Georgia and was funded by the EU project "Support to the Public Defender's Office".

The "Me - Ombudsman" is a competition organized by the Public Defender and is intended for students between 13 to 18 years old. The ombudsman is a person who acts as an intermediary, representative and defender of human rights, between the citizen and the state. In some countries ombudsman is called public defender. 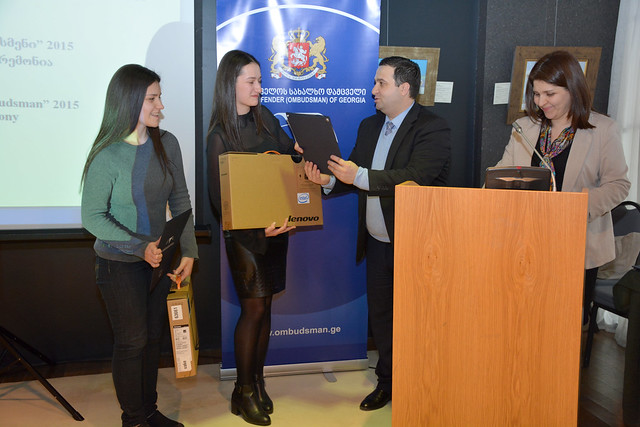